Prior to the arrival of white men, Shoshone, Flathead and Bannock Indians hunted the Madison Valley. Due to fierce winters they were unable to make permanent homes in the area but came back each spring to enjoy the lushness and generosity of the land.

Lewis and Clark crossed Madison Valley in 1805, but it would be several more years before settlers discovered the area.  Gold was discovered in Alder Gulch in 1863 bringing on The Rush. Madison County was created in 1864 in what was then Idaho Territory. The area was designated Montana Territory that same year.

Two months after gold was discovered in Alder Gulch, William Ennis homesteaded the site along the Madison River which quickly became the Town of Ennis. Mr. Jeffers did likewise across the river. The two towns, their bridges, the tall grass and favorable climate soon attracted ranchers, farmers and businessmen. Three major stage lines freighted through Ennis by the late 1880’s. Livestock thrived, wild game was plentiful and White Cloud’s tribe of Bannock Indians were valued friends of the settlers.

The town of Ennis was incorporated in 1956.

Today, Ennis is a community of 1,000 plus people. The valley is primarily cattle country producing prize Herefords and Black Angus along with rotating crops of hay and grain. Timber is harvested from nearby national forests and gold mining is making a comeback. As a resort community, the Town of Ennis attracts an influx of seasonal population because of its location in the heart of prime fishing and hunting territory. The Madison River, which skirts the east side of Ennis, is a blue ribbon trout stream, and the surrounding mountains, including the Madison Range to the east, the Tobacco Roots to the northwest and the Gravelly Range to the south, provide excellent habitat for a variety of big game animals.

The town of Ennis is located in southwestern Montana approximately 60 miles southwest of Bozeman and 70 miles northwest of West Yellowstone.  Ennis lies on the eastern side a Madison County in the Madison River Valley.  A vibrant community of approximately 900 residents, Ennis features year-round outdoor recreation and an authentic, western atmosphere.

The purpose of the website is to serve as a resource for residents and visitors to learn more about our town.  We’ve put together several resources we think you’ll find useful.  If you have any questions and recommendations for improvement, please contact us.

Please clear your car and turn on your lights. 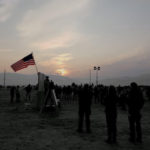 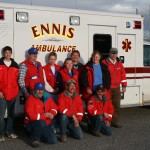 Ennis Ambulance is Looking for Volunteers
‹›